You can’t help but be impressed with the Finnieston Crane’s monolithic magnificence. Retained as a visual reminder of Glasgow’s shipbuilding heritage, the near 100-year-old imposing structure has become an iconic, well-loved and photographed attraction. It appears prominently in every skyline photo and graphic of the city.

The Cran – as it is affectionately known – is located adjacent to the Scottish Event Campus, home to the SEC Centre and Norman Foster and Partners’ equally iconic SSE Hydro and SEC Armadillo.  These venues will host the 26th UN Climate Change Conference of the Parties (COP26) in November 2021, so we should expect to see many more traditional and social media images of the giant cantilever crane in the coming months.

Built-in 1932, the Finnieston Crane (or Stobcross Crane as it was initially known) has largely sat untouched since the late 1960s.  However, it has been party to creative pursuits, most notably when in 1987 artist George Wylie suspended his full-size Straw Locomotive from it. Two years later, it lifted his iconic installation, the Paper Boat, into the River Clyde and fittingly George’s trademark symbol: a question mark was hung from the crane’s hook after his death in 2012. The crane has also been a canvas to many light shows, including when the MTV European Music Awards came to town in 2014.

We’re excited to hear that the much-loved structure may soon enjoy a new lease of life as plans are afoot for Glasgow’s symbol of strength and integrity to become the city’s latest visitor attraction as it’s developed and reinvented for the benefit of the community. We think it will be a great addition to an area of the city which has in itself changed from being the centre of Scotland’s industrial, maritime might to a creative centre for world-class events.

Needless to say, as proud Glasgow residents, McAteer Photo has photographed the Finnieston Crane on many, many occasions, although sadly not when Wylie’s Straw Locomotive was in suspension and nor have we ever seen it in motion. The crane dominates the north bank of the River Clyde at Finnieston Quay, pointing south-east toward the city centre. So for daytime shots, you’ll find the sun appearing behind the metalwork to the south for much of the day when you can make the most of the crane’s criss-cross steel silhouette. For dusk and evening shots, head over to the south bank between Pacific Quay (home to BBC Scotland and STV) and the Clyde Arc bridge, to picture the crane within its familiar Glasgow setting. You can also capture some stunning close-up drone footage at certain times, but you must check with the CAA, NATS or use your drone software to identify whether you are in a no-fly zone as, on occasion, the area is designated as such. A great view can also be captured from the Radisson Red Skybar. But we’re confident that regardless of how you photograph the Finnieston Crane, your images won’t disappoint. 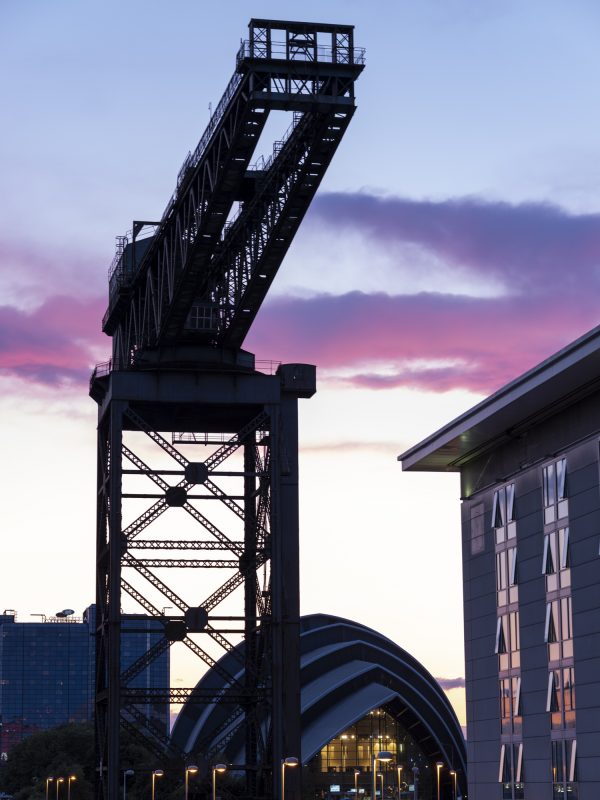 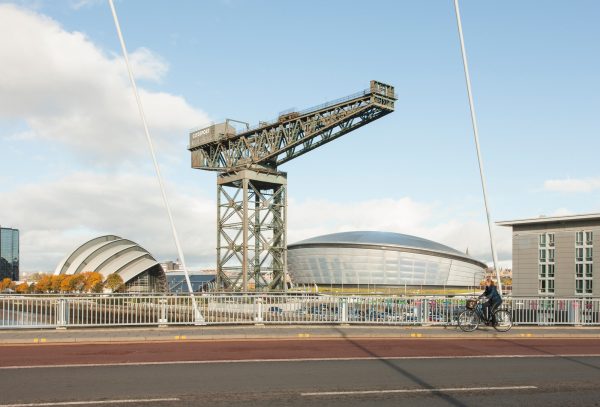 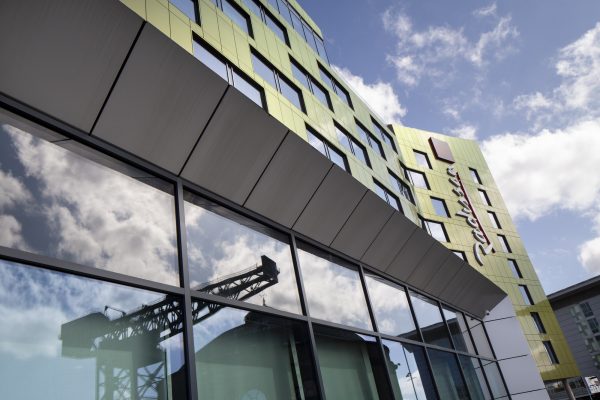 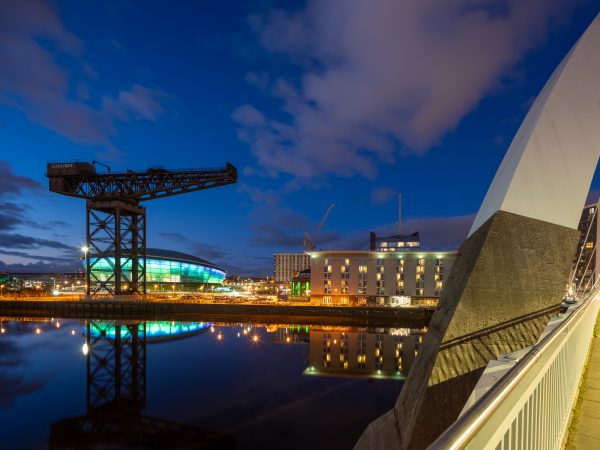 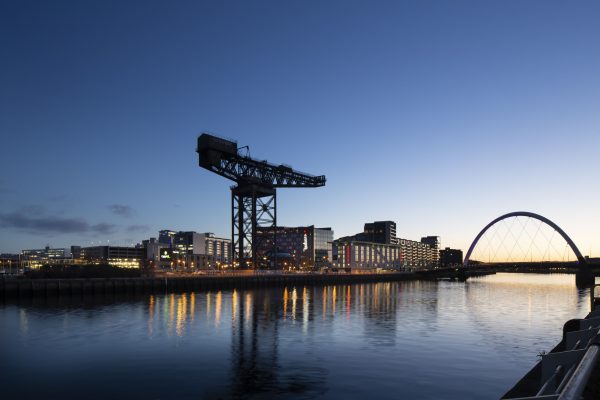 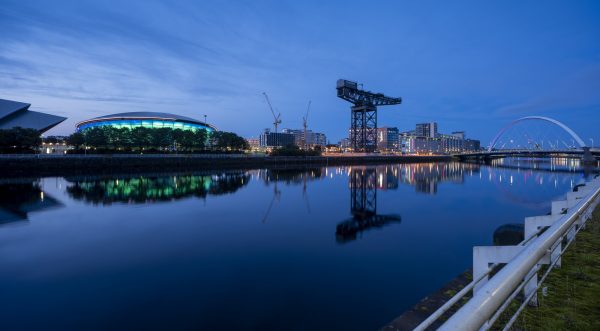 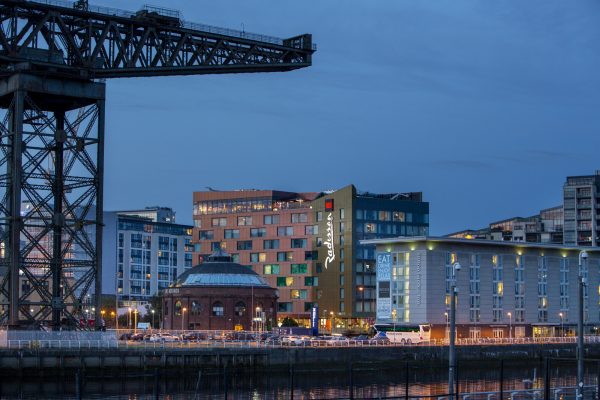 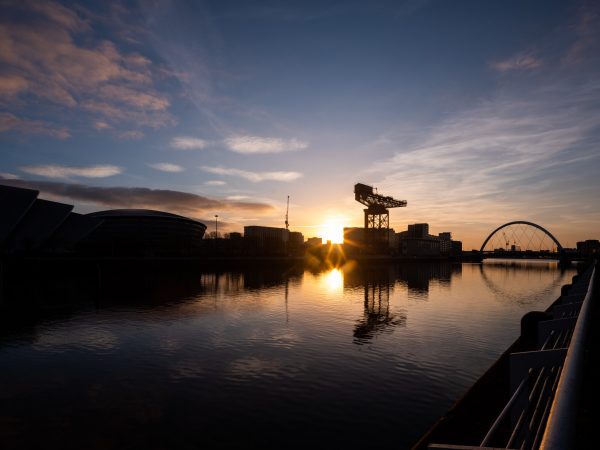 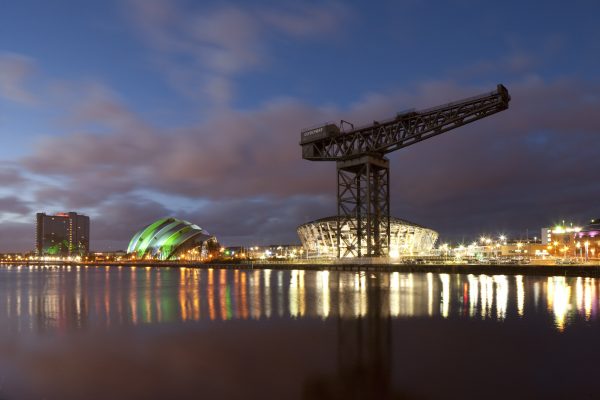 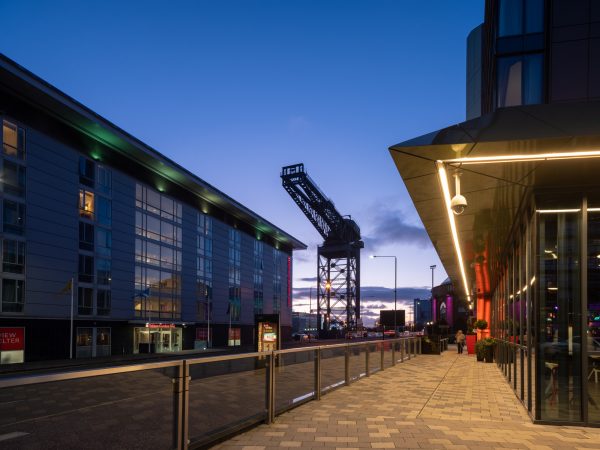 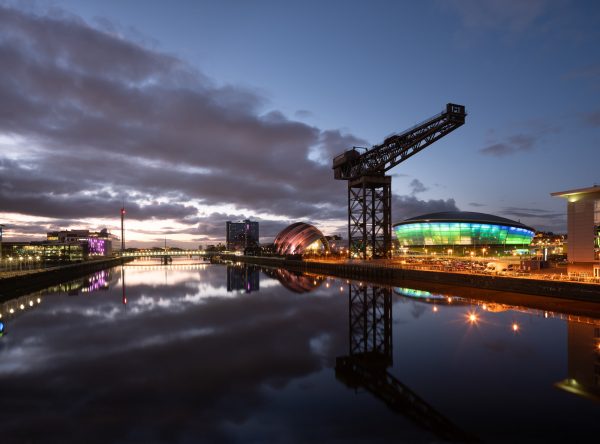 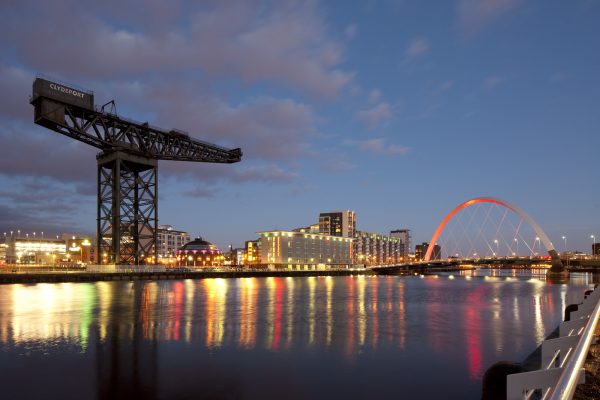 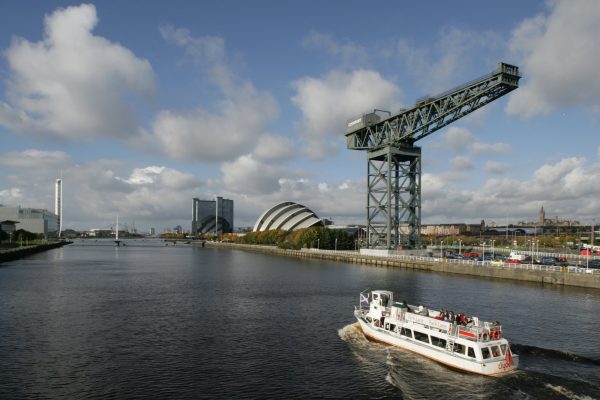 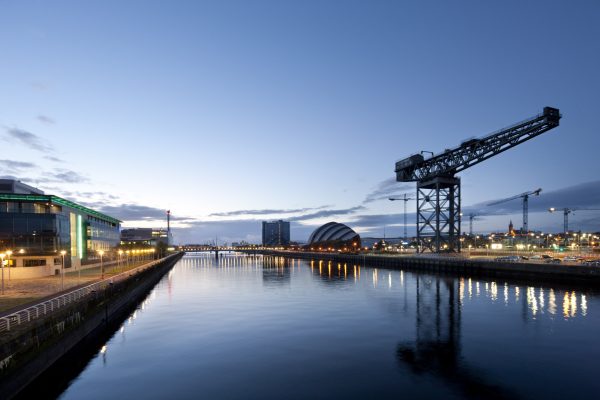 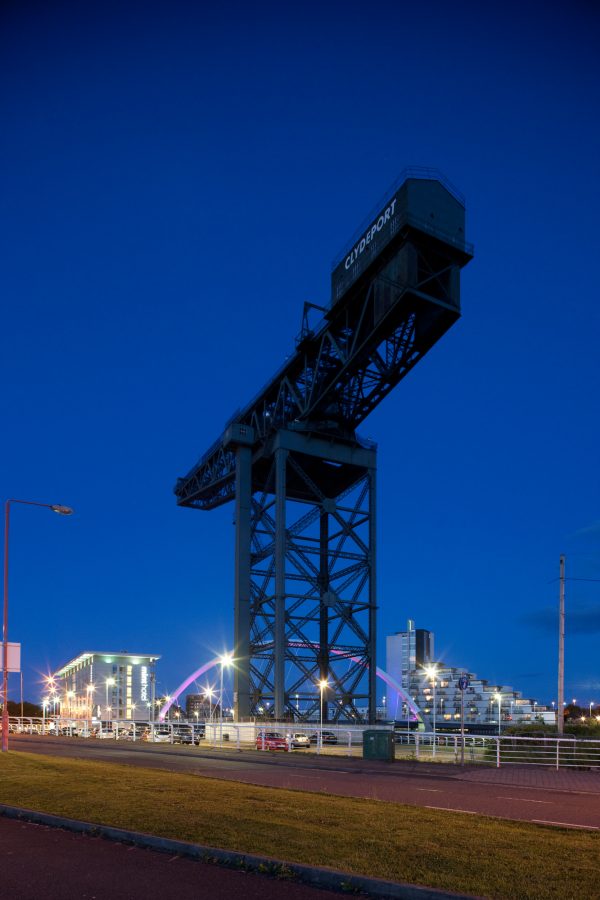 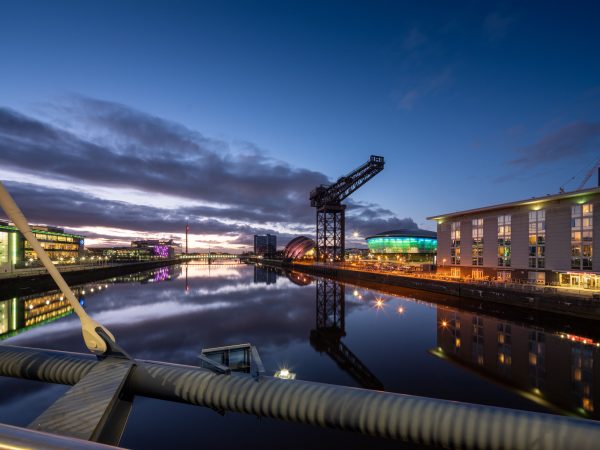 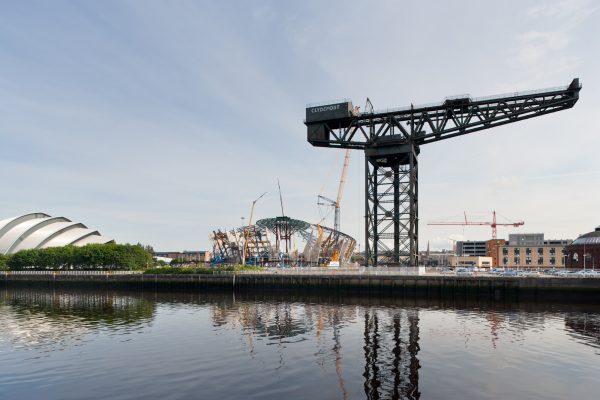 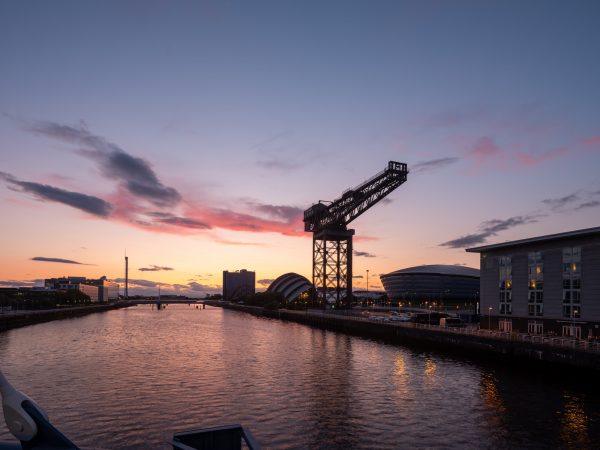 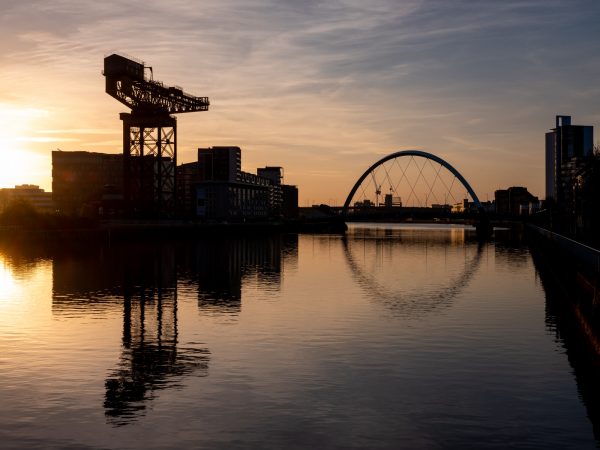 See more images of the Scottish Event Campus and the site of the 2021 COP26 event in our SSE Hydro project here.